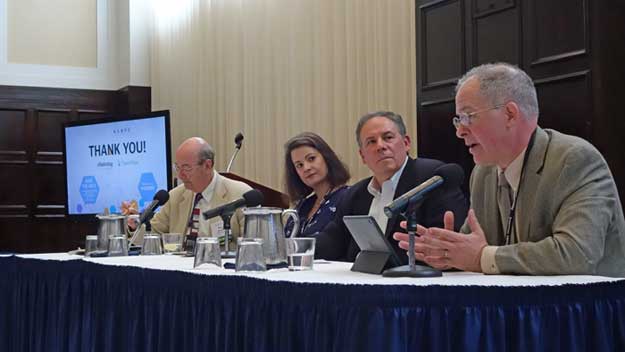 What should you do when your publication’s sales reps request coverage of advertisers? How can you deal effectively with workplace harassment? And those new freelancers you’re taking on: How can you obviate conflicts of interest? Those were just three of the ethical conundrums addressed during the ASBPE’s annual conference at The National Press Club, Washington, […] 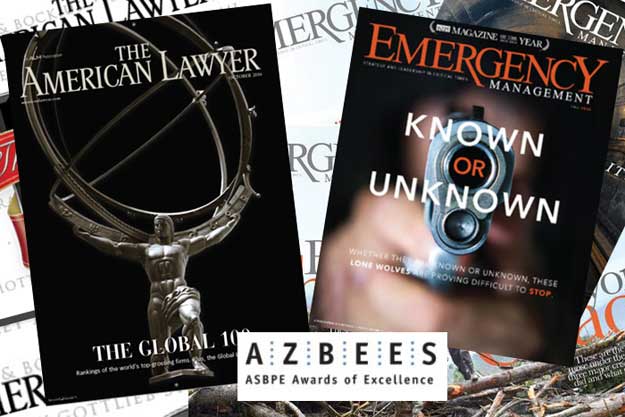 Offer exclusive content. Solve real world problems. Communicate with readers. Common principles, all, at great business-to-business (B2B) magazines. In a recent webcast sponsored by the ASBPE, editors Kim Kleman of The American Lawyer and Jim McKay of Emergency Management spoke about the winning publications of the latest “Azbee” Magazine of the Year awards. “Editing a B2B […]

Maybe it’s a good thing Michael Shane worked as a professional musician before landing his current gig as managing editor at Bloomberg Digital. Editing for the web, it turns out, is something like playing Chamber jazz: A successful performance marries the improvisation of an Ornette Coleman riff to the discipline of a Bach cantata. The […] 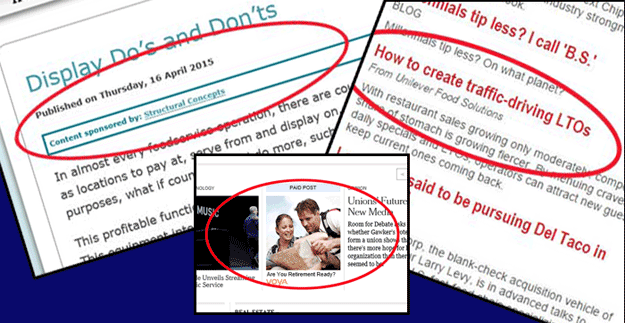 Can business publications run native advertisinq without forfeiting their integrity? Three editors addressed that question in a recent webinar titled “The Rise of Native Content: How to Make it Work for Your B2B Publication Without Sacrificing Your Ethics.” The webinar panelists seemed to agree that native advertising can be a legitimate money-maker for a magazine–as […]

Keep one eye open for better ways to serve your reader. And keep the other focused on new ways to leverage technology. That was the dual message from the winners of the 2014 Azbee Magazine and Web Site of the Year awards. On the morning after this year’s awards dinner on July 25 in Chicago, […]

“Do readers like our stories?” That time-honored query of the conscientious editor was once answered informally by the occasional angry letter from—or casual chat with—a subscriber. In the best of times an editor would seek wisdom from runes scratched into reader surveys received months after articles appeared in print. Thanks to the Internet, the editor […] 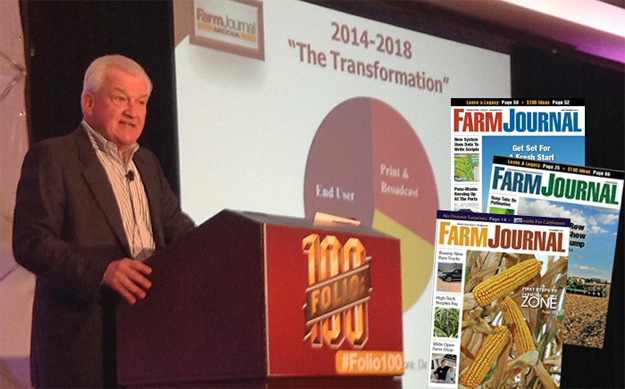 “Think a decimal bigger.” That ambitious directive from CEO Andy Weber (pictured) has become a winning mantra at Farm Journal Media, a fully integrated multimedia company that has doubled in size over the past five years. “I want my division presidents to be concerned with $500,000 projects, not $50,000 ones,” explains Weber. “I want my […]

Every magazine needs to refresh its brand once in a while. But when Inc. decided its own time had come for a design makeover, editor-in-chief Eric Schurenberg (pictured) realized he had to approach the task with a certain degree of delicacy. “We have a brand that is really powerful,” he told an audience at a […]

Fortune Sets Course on “Brands Within a Brand”

When Fortune managing editor Andy Serwer describes his occupation to an inquisitive taxi driver, the usual reaction is some variation of “oh yes—the Fortune 500.” That common refrain testifies to the importance of the magazine’s annual compendium of top performing companies—and to that list’s high level of recognition in the public imagination. “The Fortune 500 […] 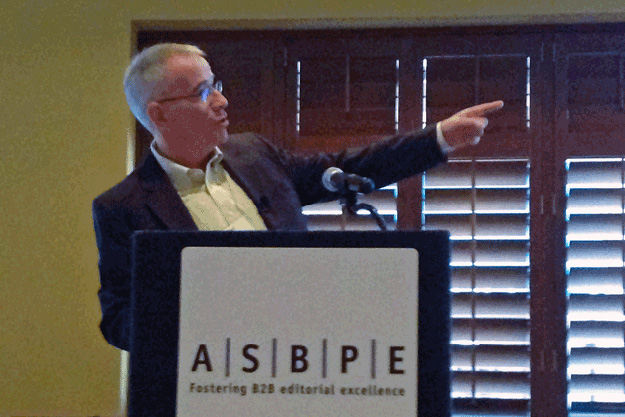 The editor was showing off the latest issue of his glossy business magazine. Big. Bulky. Packed with full page ads. Everything shouted one vigorous message: Business is great. Paul Conley shook his head—inwardly, at least. “I didn’t have the heart to tell him all those ads were ‘make goods.’” Grim anecdote, true. But emblematic of […]

The heat is on: Faced with a need to fatten revenues, publishers are pressing editors for marketing assistance. Blurring the line between content and advertising, though, can erode a reputation for impartiality valued by readers. Magazines can avoid damage to their brands by establishing ethical guidelines. What should they be? Editors and writers attempted to […] 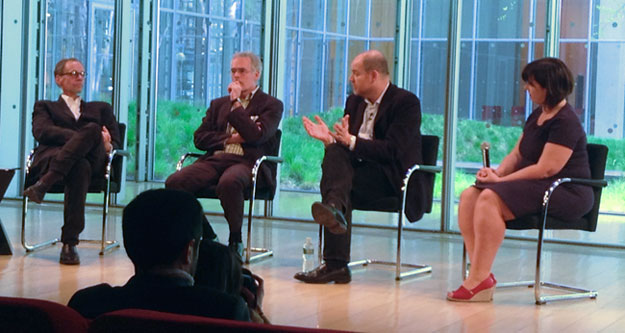 Twitter: Easy, rough and raucous. Journalism: Tough, refined and reflective. Can a marriage of this odd couple endure? If the answer is “no,” it won’t be for lack of interest in a meaningful relationship. Attracted by Twitter’s rapidly growing hegemony over breaking news, publishers are struggling to thread the social medium’s chaotic feeds into legacy […]

Traffic for business content—traditionally living in the 9 to 5 world of desktops—has risen considerably on mobile devices. And that base is only getting bigger. Business publications expect more than a quarter of their audiences to access content exclusively on digital platforms within the next two years, according to a recent study by the Alliance […]

Connecting with Consumers in Digital Times 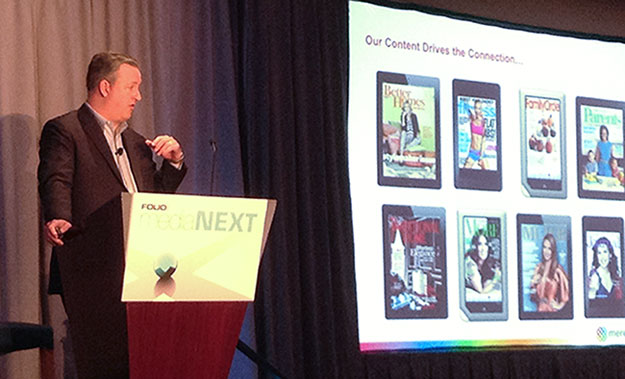 How does a magazine publishing company survive and thrive in the digital age? By changing with the times without betraying its core mission. On the one hand the company must engineer editorial to meet the requirements of delivery channels such as social media and mobile apps, molding its product to conform to and exploit the […] 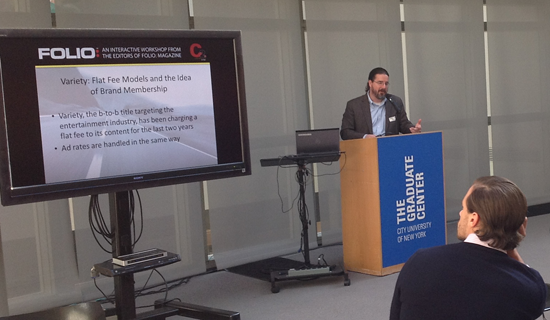 Magazines large and small are turning their attention to profitable digital strategies. What works when moving from print to web? That’s the topic covered by C2: Content and Community on Tour. The one-day seminar, offered in various cities by Folio: The Magazine for Magazine Management, covers fast-changing technologies that are transforming the relationship between publisher […]