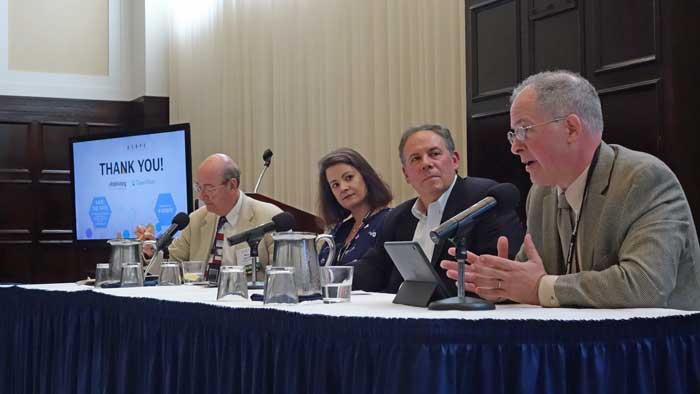 What should you do when your publication’s sales reps request coverage of advertisers? How can you deal effectively with workplace harassment? And those new freelancers you’re taking on: How can you obviate conflicts of interest? Those were just three of the ethical conundrums addressed during the ASBPE’s annual conference at The National Press Club, Washington, D.C.

Conference attendees paid a good deal of attention to the growing erosion of the church-state wall between advertising and editorial. As vendors shift more of their budgets to the Internet, ad sales people are requesting more editorial favors to help move print space.

“In our world now, the concrete barrier between the editorial and advertising departments is more like a dotted yellow line,” said J.D. Solomon, Editorial Director at Professional Media Group. “Editorial is expected to sometimes go on the other side of it, but with caution.”

That caution arises from what Solomon called “two compelling and sometimes difficult to reconcile prime directives in B2B publishing.” The first is to maintain editorial integrity. The second is to avoid biting the advertising hand that feeds you.

“It’s not an easy line to navigate,” he concluded. “In fact, it’s a minefield.”

Lying at the root of these conflicts, said Solomon, is the tendency of many sales reps to view company mentions as a form of currency that can be used to reward current advertisers and woo new ones. “The sales people like to send notes to their prospects saying, ‘Hey, guess what? You were mentioned in a story. Here’s a link to it; isn’t that nice? And by the way, maybe we should talk about some more advertising.’” More editorial mentions mean more sales. Hence the pressure for happy ink.

Solutions for the problem abound, some more effective than others. In a presentation titled “Navigating the Minefield of Editorial-Advertising Conflicts,” Solomon reflected on his experience directing the editorial departments of District Administration, published for school district leaders, and University Business, read by college and university leaders.

Solomon’s first stab at a solution was the introduction of a policy common to many other newsrooms: a prohibition on vendor quotes in published articles. The move was a practical one in this instance because Solomon’s magazines serve fields well populated with non-vendor subject matter experts.

While the new policy freed staff writers from much of the hounding to include favorite vendors in round-up features, the sales departments continued to feel advertisers should be recognized editorially in some fashion. Solomon responded with an Industry Viewpoint column presented as a sidebar separated visually from the regular editorial well. Because the vendors responded to specific questions on industry topics not directly related to their products, readers actually obtained useful information. “This has worked out well because it gets vendors into the publication in a responsible way.” 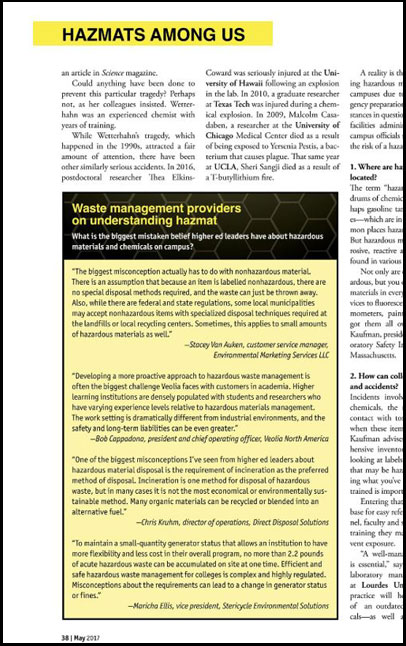 Maybe the Industry Viewpoint column was successful, but two problems arose. First, hard feelings resulted when vendor comments submitted past deadline had to be omitted. Second, so many vendors wanted to participate that the feature began to hog space. “It got to the point where we could have run two pages of quotes for each column,” said Solomon. Solution? He removed the column from the print product and posted it exclusively online. “Now we can include as many vendors as we want. And if a vendor misses the deadline we can just add the comments later. No one is the wiser.”

The sales reps are still not completely satisfied, admitted Solomon, since they often complain that the vendor comments are not in the print edition. “But at some point, you have to say, ‘Look, it’s a vendor mention, and it works.’”

The magazine has introduced another vehicle for the dissemination of vendor viewpoints: A paid-for Leadership Column, labeled as sponsored content, which vendors create with the help of the publisher’s content marketing department. This replaced a more traditional guest column which had consisted of unsponsored editorial copy, and which attracted too much vendor participation. “The Leadership Column has proven to be a workable solution,” said Solomon. “And the sales reps are happy because they get another product to sell.”

It’s among the stickiest of issues in the B2B field: How do you handle all those press releases touting new products, equipment installations, company awards and personnel advancements? While vendors crave the publicity, trying to be even-handed editorially can swamp any publication’s available space.

Solomon’s first attempted solution seemed reasonable: Include all the above materials in an Industry News section at the tail end of a daily e-newsletter aggregating material from other websites. Alas, this solution proved less than ideal because so much of the industry news consisted of personnel announcements and industry awards, inclusion of which made the e-newsletter far too large. So Solomon decided to limit the material to new product announcements and major new installations.

So far so good. But what about all those personnel changes and industry awards looking for a home? Solomon decided to house them in yet another feature. “We created something called a PR Portal online, where advertisers could post any press releases they liked,” said Solomon. While the portal consisted of paid advertising, regular advertisers could post press releases for free. It worked. “Now public relations agencies and marketing people get credit when they send emails to clients with links to their announcements.”

Solomon came up with another vehicle to meet the need: Each issue sports a feature describing how a half dozen or so educational institutions are implementing a specific vendor’s product. “It’s editorially written, there’s no fluff, it’s useful to our readers, and its’s very popular along the vendors.”

As the above comments suggest, a lot of attention is paid to the topic of new vendor offerings. And it’s not just because advertisers crave coverage. “In B2B publications, new product information is important,” said Solomon. “How to handle the topic responsibly and ethically is always a challenge.”

At one time the publication published an annual Top 100 Products section selected by the editors.  Problems arose as sales reps lobbied for the inclusion of their favorite vendors’ merchandise. To alleviate any sales-side pressure, item selection was removed from the hands of the editors and given to the readers in an annual Readers’ Choice poll.

What at first seemed like an ideal solution, though, introduced new problems. Very often top-quality products were ignored by responding readers while obscure items would end up with lots of votes. Since the result was less than useful to readers, the magazine replaced the Top 100 concept with an annual paid-for Advertiser’s New Products Showcase. Frequent advertisers are given free listings.

One more thing: Each issue sports a product focus section containing capsule descriptions of new products in a specific category. “Sometimes the products don’t actually have to be new to get in,” notes Solomon. The presentation is kept plain, without any vendor logos, to encourage more paid advertising.

Panelists at an ethics roundtable (pictured) addressed additional challenges beyond the erosion of the advertising-editorial divide. One was workplace harassment, a topic attracting renewed national attention today with the rise of the #metoo movement. “Harassment is any unwelcome conduct as determined by a reasonable person,” said Beth Mirza, Director of Online News Operations at the Society for Human Resource Management. “If you think some behavior looks bad, then it is bad. You’re a reasonable person and you can report it.”

Warren S. Hersch, senior reporter for Money-Media and past president of the ASBPE, addressed the ethical challenges that can arise when an editor or writer takes an active role in a covered industry. While covering the life insurance field, Hersch himself had decided to become a licensed agent for the purpose of deepening his industry knowledge.

If such an initiative can lead to better reporting, it also poses significant conflicts of interest. For example, should any sales commissions be donated to charity? And should the writer be prohibited from reporting on any carrier for which he or she served as an agent? Hersch cautioned that such questions should be addressed before a writer ventures forth into a real-world venture.

Finally, Roy Harris, interim ASBPE Ethics Committee Chairman, addressed the tricky topic of vetting freelancers. This task has become more challenging and more vital in a publishing environment where a greater number of independent writers are chasing fewer jobs. As publication pay scales have flattened or fallen, a greater number of freelancers are shuffling gigs in public relations, sponsored content and journalism. More than ever, it’s easy for writers to inadvertently engage in conflicts of interest.

As a partial solution, some publications ask freelancers to sign ethics policies which require the disclosure of conflicts of interest. Others, faced with a limited number of freelancers who can write in a specific field, prohibit writers from covering specialty subsets for which they have received corporate monetary compensation.

Obtain more information about the ASBPE at http://www.asbpe.org/