Maybe it’s a good thing Michael Shane worked as a professional musician before landing his current gig as managing editor at Bloomberg Digital. Editing for the web, it turns out, is something like playing Chamber jazz: A successful performance marries the improvisation of an Ornette Coleman riff to the discipline of a Bach cantata.

The self-expression part of that cognitive dialog, and its concomitant risk, is only too evident to any blogger who has hit the “post” key on the far side of prudence. “It's dangerously easy to say ‘yes’ to things on the web,” says Shane (pictured, above). Breaking news, after all, passes across the virtual desk all the time, and each item possesses its own allure. “You say ‘Oh, I'll just write that story.’ Ten minutes later it's out and your reputation is destroyed.”

The way to protect yourself (and your organization) is to harmonize the elements of self-discipline, training and skill. “At Bloomberg we have established clear routines for making decisions and working together,” says Shane. “That kind of discipline allows us to improvise when we need to. If you don't have a disciplined approach as a foundation, then when stuff hits the fan you won't have the flexibility to respond to it.”

Shane might well have absorbed another skill as he played his clarinet with the Cleveland Symphony: A conductor’s organizational talent. His current duties demand the coordination of Bloomberg’s multifarious story-telling initiatives across many digital platforms. Those include web-based magazines, radio, and television. Furthermore, each week’s paper edition of Business Week must be transmogrified into a web presence.

“We're talking hundreds of stories per day that have to find their way to the right place at the right time,” notes Shane. “Part of what I do is help everybody collaborate.” That means working closely with senior editors who receive copy from Bloomberg’s 2,600 journalists in over 70 countries.

The end goal, of course, is service to the reader. Shane estimates that over 50 million people visit Bloomberg’s digital platforms monthly. Giving them want they want can be quite a challenge. 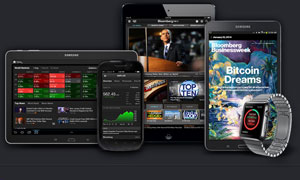 Bloomberg business stories appear on a variety of devices.

What, come to think of it, do readers want? Shane addressed that question in these terms: “One of the very first editors I ever worked with on the web said ‘they don’t know what we know.’ That has always stuck with me. The audience doesn't know what we know. That's why they read our stuff. We can't forget that, whether we're thinking about story selection or angles.”

Telling what you know means, first, getting headlines early and accurate. “Breaking the news first and being right is really important, especially in a place like Bloomberg, where moving a story one second before a competitor can move a world market,” says Shane.

But headlines alone are insufficient. Thanks to burgeoning Twitter and Facebook feeds, breaking news has reached a state of such ubiquity that the provision of analysis has become equally important in making a web publication stand out. “The web audience wants an answer to the question ‘what does it mean and why does it matter?’” says Shane.

Enter the interpretative second day story. Writing a great one builds a reader loyalty that creates a foundation for additional value. “If you can't tell the second story, then you don't really put yourself in a position later on, to tell the feature story, the enterprise story,” says Shane. “You don't really have the credibility you need to participate in that conversation. On the web you have to build a robust track-record so you have work to refer to when you're telling longer stories, or you're looking at a story from a different angle.”

If news and analysis compose a story’s meaning, length is a critical element of form. Shane identifies two broad groups into which second-day stories fall. The first consists of succinct, efficient stories of fewer than 800 words. There’s a big audience for these, says Shane, largely because more people are reading stories on their smart phones, while commuting or walking down the street or sitting on their couch because they don’t want to go to their computers. The second group consists of enterprise stories of more than 1,000 words, for which Shane identifies a “nice big audience.” (And stories from 800 to 1,000 words? Shane banishes them to an “editorial wasteland).”

Given these two popular story lengths, the editorial conversation must include a consideration of the right format for each story. Even when a topic lends itself better to a shorter treatment, Shane spends considerable effort considering how to present it in the most powerful way. “This is something I think about a lot,” says Shane. “Does a story need to be 400 words or can it actually be a really phenomenal chart and three sentences? Or maybe a photo essay with captions?”

Stories that fall into the 800 to 1,000 word wasteland get special attention. Can the story be done with fewer words, or does it need more? Or can it be turned into two shorter stories? Finally, stories that appear to work best in long form are subject to further analysis. Might a 1,500 word piece, for example, be more impactful if split into three 500 word linked stories?

These comments suggest that length is a matter more of necessity than intent. “Short is not necessarily bad,” says Shane. “Short doesn't mean less smart. Short doesn't mean careless. Short just means that's how many words you need. You see this in any other discipline where you're making something out of thin air, whether it's music, or art, or film, or fiction-writing and story-telling. It really only needs as many words as you need, and not any more or any less.”

Give us long form

Now, how about those stories that really need to eat up the digital landscape? Given its reputation as a shorticle nirvana, it’s ironic that the web is more convenient than print for a long form treatment. Consider this: One of the most successful stories in the history of Bloomberg was a 38,000-word behemoth by Paul Ford titled “What is Code?” 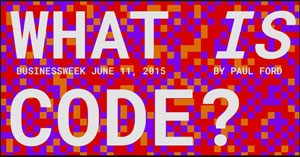 The article took up an entire issue of Business Week, and readers loved it. “Since we relaunched our site in January, ‘What is Code?’ had the highest level of user engagement of any story that we’ve ever published,” says Shane. Of course, that came as a surprise to many, not least because of the piece’s demanding subject matter. “It was an insanely long story that demanded a lot of its readers. The best stories ask a lot of their readers, I think.”

For the long form treatment to work, editors must know their audience. “The biggest conversations we had while we were planning that article was ‘Who is the audience?’” says Shane. “On one hand it was a very technical piece about the history of programming languages and how they work, and how they talk to each other, and where they're going. On the other hand, the story wasn't written for people who already know all that stuff.”

Lesson learned: The web lends itself to long form analysis when mandated by subject matter readers find compelling. “It was, I think, a heartening moment for everybody who works in media and journalism and story-telling,” says Shane. “It shows that there is absolutely room to do insanely ambitious off-the-wall things.”

There’s another lesson learned from the Bloomberg experience: Today’s business writing thrives on diverse skills. “The digital newsroom is the perfect playground for the polymath of the 21st century,” says Shane. “If all you know how to do is write or edit, you're really not that useful to me in my newsroom. Today it's more important than ever to bring other skills.”

Such as? “We're looking for people who have an intrinsic understanding of social media and its place in the newsroom, who understand how to work with teams making video, and how to work with designers and developers,” he says. “So that when we're collaborating on something the process is as efficient and as fast as possible without sacrificing quality.”

As those comments suggest, technological knowledge should be part of the cognitive mix. Says Shane: “If I have a reporter and an editor who understand what CSS is and how it works, have experience working with video producers to tell stories, can go with the video team to shoot and interact with the subjects there, and have an idea in their head of what the video and the piece are going to look like in the end, that's going to be a much more efficient and successful collaboration.”

Mastery of diverse skills, then, fosters collaboration. And working well together, says Shane, is of paramount importance to a successful newsroom—especially one such as Bloomberg’s where so many stories move on so many platforms. “No story ever makes it to the web unilaterally,” he says. “There's always collaboration required, whether it's on the extreme end, like the Paul Ford piece, or something much simpler.”

The value of diversity extends beyond technical skills into broader knowledge fields. “In my opinion, nothing is more interesting than an unconventional background for a journalist,” says Shane. “I think that having a varying set of experiences, especially if you're working digitally, can be really helpful.”

Shane’s own musical background (he never attended journalism school), is, of course, a case in point. “As a musician I spent a lot of time in a room, by myself, playing an instrument to no one,” he says. “What I took from that was the value of planning. Practicing in music is really just planning. It's like putting money in the bank. You have a limited amount of time to do it and the way you spend your time has to be very thoughtful. It doesn't matter if you practice ten hours a day. If you're not thinking while you're doing it, and making decisions and drawing conclusions, then you're not going to get any better.”

Planning requires both creative thinking and self-control, qualities that Shane values to this day. “It is the rigor and discipline of working in classical music that I try to bring to the newsroom,” says Shane. “Which is weird for me because I'm actually a very zany, extroverted guy. But I think that working in classical music really grounded me and balanced me out.”

Shane instills into his staff a similar appreciation for discipline that provides the freedom to innovate. “I really, really believe that if you give people a process and tools they can rely on, when the time comes for them to be flexible and creative, muscle memory will take over and give them the space they need.”

This story is based upon a presentation by Michael Shane at a July, 2015 gathering of the American Society of Business Publication Editors (ASBPE) in New York City. The session was moderated by ASBPE president Mark Schlack.