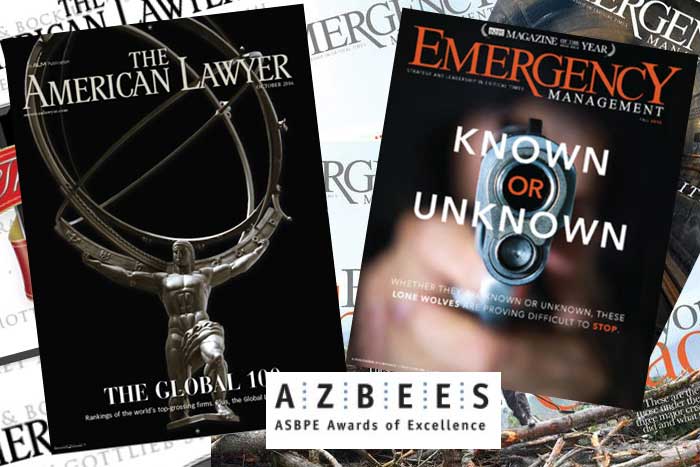 Common principles, all, at great business-to-business (B2B) magazines. In a recent webcast sponsored by the ASBPE, editors Kim Kleman of The American Lawyer and Jim McKay of Emergency Management spoke about the winning publications of the latest “Azbee” Magazine of the Year awards.

“Editing a B2B magazine is a tough job,” said Sam Oches, ASBPE webcast chair, in introducing the speakers. “From researching and reporting to management and strategic thinking, editors face a tall order in assembling a comprehensive product that is valuable to their readers.” 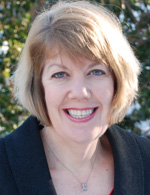 Start with unique value. “My first and foremost strategy is to give readers something exclusive, something they will pay a handsome fee for,” says Kleman.

For The American Lawyer, that something is a database loaded with forty years of numbers on matters such as law firm revenues, salaries, staff size, and profits per partner. Kleman believes this resource gives her publication a fundamental advantage over the competition. “I would counsel anybody out there: Find your audience and the things they’re most interested in, then determine how you can offer something only you can provide. I call it gold content.”

The American Lawyer’s data cater to the competitive nature of the world’s most elite lawyers. “They want to know how they’re doing versus their competitors and how much their partners are making versus those at the firm down the road,” says Kleman.

The deep array of figures allows the magazine to reveal important trend information, adds Kleman. “How has this particular firm done over the years? What happened to the industry over the same period?”

Kleman emphasizes the need to dig below the surface: “It would be a boring magazine if what we wrote was just about numbers and facts and data and spreadsheets,” she says. Instead, the numbers serve to stimulate interesting topics. “With numbers as the underpinning we can really go deep. We may decide that we need to write about a certain firm, about the tick-tock of how it went down or how it rose to its current height. We can also do lawyer profiles within those firms. Which firms are exploring new strategies that seem to differ from the rest?”

Unusual initiatives are of particular interest to a field largely conservative in its business approach. “We love to do stories on things that are new and extraordinary,” says Kleman. “Maybe these don’t rely as heavily on financial data, but they are certainly part of the conversation going on in law firm board rooms today.”

Here are some other tips from Kleman:

* Surveys such as The American Lawyer’s “Global 100” of top grossing law firms can help magazines stand out from competitors.

* Keep in touch with readers. “I try to get out and talk to my readers a lot,” says Kleman. “I typically have lunch or drinks or something two or three times a week with law firm leaders.”

* Have something fun at the end of the book. The American Lawyer, for example, has a column on the quirkiest lawsuits of the month. 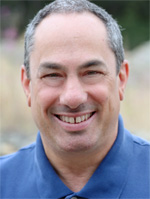 When it launched in 2006, Emergency Management filled a void. There was no publication devoted to news and analysis of government responses to hazards such as hurricanes, floods, fires and terrorism. “I think one of the things that really propels us as a publication and website is the dedicated readership,” said editor Jim McKay. “Our readers feel strongly about their profession. They tune in and pay attention. They let us know when they do or don’t like something. That helps us. We listen. We don’t want be arrogant.”

“We try to offer solutions in our stories,” said McKay. “What’s working and what’s not working? I think our readers appreciate the information we give them about what’s happening around the country and what other people in the field are doing.”

Unlike The American Lawyer, this magazine makes extensive use of freelancers. “I have three or four freelance writers who’ve been writing for me for several years now, and I trust them,” says McKay. “They write the way I like stories to be written. I know each writer’s strengths and weaknesses. They always come through for me. I pay them what I can to keep them. I see them as a huge strength in the magazine.”

McKay’s freelancers are mostly former newspaper journalists. “They’ve learned the rules,” he says. “They write concisely. They get to the point quickly. I like their active voice and no-nonsense style. It’s something I think our readers appreciate, being first responders and emergency managers.”

In contrast, says McKay, industry experts will often get one aspect of a story down well, but fail to develop the big picture. “Sometimes the experts are biased. I really believe that if you have journalists who are well-schooled, tireless, and enjoy the subject matter, you can’t go wrong.”

Both editors balance their online presence with the demands of their print magazines. “We try to use as much content as possible for each one of our mediums in its own way,” says Kleman. “We don’t have the luxury of saying, ‘this is just for the magazine. It won’t see the light of day online.’” For each new story, the staff asks questions such as: “Would this lend itself to some great video of people talking? Would this be a slide show online? Would this be an interactive chart? Then what would this concept look like for the magazine?”

While just about everything used in the magazine finds its way online, the reverse is not true. “There’s a lot more that we publish online that can’t, for space reasons, get into the magazine,” says Kleman. “We cherry-pick the best news of the month for The American Lawyer.”

Emergency Management also tends to emphasize breaking news online, says McKay. “The magazine articles, in contrast, look back at lessons learned from prior disasters and offer those to readers around the country.”