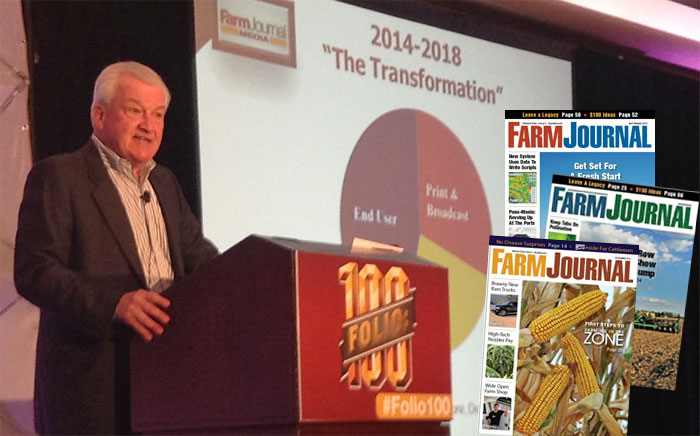 “Think a decimal bigger.” That ambitious directive from CEO Andy Weber (pictured) has become a winning mantra at Farm Journal Media, a fully integrated multimedia company that has doubled in size over the past five years.

Double Up
Weber’s big think initiative, combined with a determination to bust silos and institutionalize innovation, has allowed his 137-year old company to fuel expansion through internal growth rather than acquisition. Today Farm Journal Media maintains 41 products that generate over 23,000,000 monthly agricultural touch points. And Weber plans to double the firm’s size again over the next five years.

Weber discussed his company’s progress and plans in a keynote address at a recent FOLIO: 100 Awards Ceremony in New York City. As might be expected, the firm has taken an aggressive plunge into digital. “We have grown our digital revenues 350 percent in the last five years,” says Weber. “It now represents well over 20 percent of our business.”

Weber highlighted one digital product: Commodity Update. This acquisition is now a multimillion dollar text marketing business that has grown to 75,000 subscribers from the 15,000 when it was purchased. It now has an 80 percent market share in the agricultural text marketing messaging business.

While only a third of the company’s revenues come from print advertising, that portion is 35 percent bigger than a decade ago. Again, the increase resulted from internal growth rather than acquisitions. Print products include the company’s flagship Farm Journal, as well as Top Producer, Beef Today, Dairy Today and Implement & Tractor.

“We're not deemphasizing print,” says Weber. “The flagship publication will always be part of our culture.” Together, digital and print revenues represent about half the company’s business. 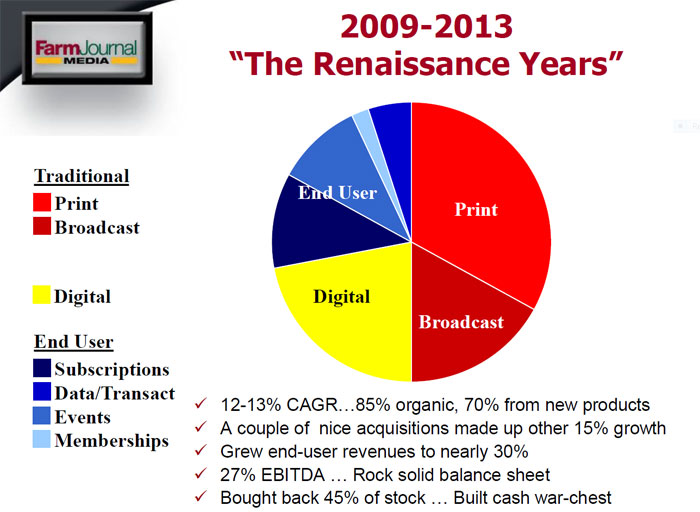 Fueling growth
Weber attributed the company's decade-long success story to a number of growth-oriented initiatives in addition to the “think a decimal bigger” mindset. One goes under the slogan The Drive for 25. “The idea was to grow in profit 25 percent a year and maintain a 25 percent EBITDA margin (and if we go above that, plug it back into growth). Then, finally, achieve $25,000,000 in EBITDA.”

Another initiative was to break down silos. “We consolidated three sales forces–print, TV and the internet– into one,” says Weber. “We now have three divisions working through one senior vice president of sales with one sales structure and one sales force. The division presidents obviously had to buy into that, and they really did buy into it, because they helped craft it.  They were involved in it from the grass roots.”

Sales training was overhauled to reflect the new spirit of cross fertilization. Reps, for example, were trained in all media. “Our print reps learned internet and TV and our internet reps learned TV and print.”

The compensation structure has been realigned to match this new matrix, says Weber. “Each senior manager still has an annual bonus directly tied to a particular responsibility, but they also have a separate significant bonus provision that's tied to overall company performance. Then they all participate in an equity program that's tied to The Drive for 25.”

Content silos fell as well. “We added secondary responsibilities to all of our content generators, whether they were in TV, internet or print,” says Weber. Now all major industry happenings are covered with true cross content multimedia. “This gives audiences information when they want it and how they want it, and it creates an environment for advertisers to surround their customers with our products.”

Eliminating silos helped the company better serve clients with total solutions, says Weber. “Instead of competing with ourselves internally we concentrated all our efforts on solving client needs.”

New faces
The company also re-engineered its staff. “We didn't have all the right players in the right spots, we didn't have enough players, and we needed to improve the talent level in the company,” says Weber. “One of the first things we did was add a senior vice president of content development. On the content side we recruited best of class in the industry and we recruited people that got the multimedia concept.”

On the go-to-market side, the company found itself going outside the publishing industry, hiring B2B market guru Mitch Rouda when digital revenues had stalled at 10 to 11 percent of total revenues.

One of the most important initiatives was to institutionalize innovation. “Creativity has to be cultural,” says Weber. The results were favorable: Of the 26 products introduced in the past five years only three were acquired—the remainder were developed from scratch.

A big part of promoting creativity was a recognition of the attendant risk, says Weber. “You have to encourage people to take risk and you can't kill them when a project fails unless it fails for the wrong reasons.” Indeed, over the past decade the company developed around 10 projects that were failures or only marginally successful.

Do it again
Despite its rapid growth the company has managed to maintain strong financials, says Weber. “We are rock solid financially with an EBITDA margin of 27 percent and an extremely solid balance sheet that will be a springboard for future growth.” 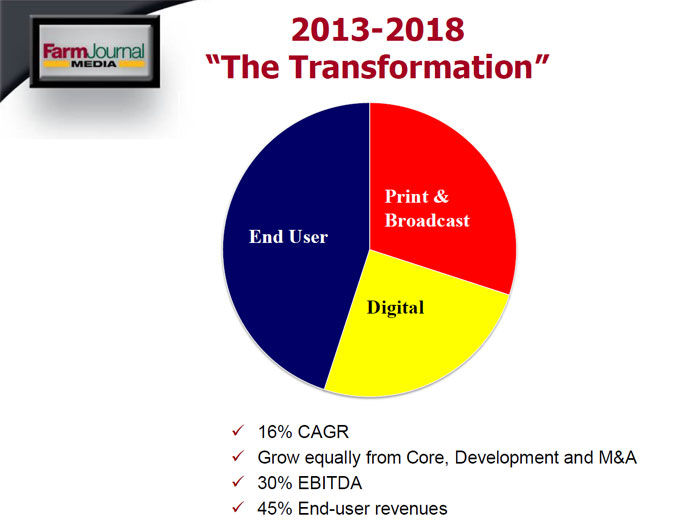 And future growth is on the table. “We're planning to double the size of the company again in the next five years, while holding a 30 percent EBITDA margin” says Weber. “The growth will come equally from core products, from product development, and from mergers and acquisitions.”

Some special attention will be paid to end user revenues, which Weber would like to grow to 45 percent of company business from a current level of just under 30 percent. (“End user revenues” refers to subscriptions, memberships, data transactions and events.)

Weber recognizes that beefing up end user sales will require new talent. “We’ve done pretty well for a bunch of media guys, but we need more DNA from people who know how to look at pain points, devise products that sell those pain points, and then make money off pain relief. That’s what I call the end user business.”